Jazz singer Lisa Engelken tackles every song as if it were the last time she might sing it.   – The Denver Post

Little Warrior is more adventurous and, by extension,

“Engelken displays her take-no-prisoners, full-of-risks attitude, playing with the versatility and different colors of her voice, mysterious, mischievous, adventurous, intimate and at times sensual.”

“This is modern jazz at its best.”
Little Warrior is an album to be discovered and loved.

“This is pan- sensual music:

“A perfect blend of beauty, elegance and power.”

Engelken never imitates, and adds her own unique and fresh arrangements, making Little Warrior another gem in her ever growing and sparkling catalogue.

Engelken knows how to push all the right hipster buttons and deliver a winning performance in the process. Melding influences from whatever interests her at the time, this crazy kaleidoscope of a journey invites you to surrender control and let her be your tour guide through the world she has created. A dandy way to expect the unexpected.

“My voice is my biography.”
It is my story, it is the sum of what’s gone down. It is my birth, my childhood, my education, my every day that I have walked this earth. It is every emotion and experience I have had.    Read Full Interview

Here’s what JazzTimes had to say about Lisa’s previous release:

“She is an utter original.”

Blessed with superlative power, control and range Engelken can, as mood requires, be as soft as dew or as intense as a sleet storm; her interpretive instincts are astounding.”

Westword Magazine named Lisa’s appearance at Dazzle Jazz in Denver to the BEST JAZZ SHOWS of the Summer !

“How Jazz Music Changed My Life”  by Ty Rushing.
A heartwarming piece.  Lisa had the pleasure of meeting this young journalist when she rolled through Kansas City last summer.

Interview with Ty Rushing:   “From Farm to Fame“
A preview to Lisa’s appearance at The American Jazz Museum’s Blue Room:

“Lisa’s music is complex and novel sounding, but not enough to prevent a capacity audience for her sets Saturday. Though Engelken performs music in the jazz idiom, she takes to heart that most important of jazz traditions, which is that there are no traditions… Her reharmonizations and diverse mix of meters had me on the edge of my seat, listening with rapt attention for the whole two hour set.”

“Caravan is exceptional by any standard.”
A winning display of imagination and freedom, her radical interpretation is what jazz is supposed to be about.”
READ FULL REVIEW

More than a song stylist, she’s a dramatic force.
Caravan  is the work of an artist with her own sound and concept, a daring improviser with the technique to express even her most unorthodox ideas.

“Engelken puts the ‘extra’ in extraordinary.“

It’s been years and we’re wearing different skins. In the dark hallway between sets we talk about our molted selves, those discarded skins we’ve left behind on paths we never knew why we traveled, and I remark how funny it is to look at our past and think we were never that person except it is so obvious we wouldn’t be here without them; I wouldn’t be here says Lisa if I hadn’t been there. We laugh, because ‘there’ means so much in music-speak: heartbreak and hope, perjury and injury, envy and sushi. Read more…

Caravan reviewed by Wilbert Sostre in Jazz Times
(May 2011 issue)

“Lisa Engelken’s Caravan is an album full of twists, turns and surprises that demands the complete attention of the listener.
The whole album feels like a live performance, and that is how good jazz should sound.”   Read Full Review

“The propulsion provided by the band gave Engelken the kind of freedom you get riding on the back of a Harley headed toward Sturgis.”

Jazz covers of rock tunes aren’t uncommon anymore, but they’re usually instrumentals. And they’re definitely not Billy Idol songs. That’s why Lisa Engelken’s version of “White Wedding” crushes; she throws out the sneer, but keeps the dark edge. It’s prettier than the original, in the way that Ark of the Covenant angels are pretty, right before they melt your face off. And Idol isn’t the only artist that gets Engelkenized on her most recent record, Caravan — the inspired covers range from Duke Ellington to Cole Porter to Joni Mitchell.

“This is an eclectic ten-pack of tunes from Lisa Engelken, a Kansas-bred, California-based singer who clearly isn’t afraid to test the outer limits of the genre. It’s a brilliant showcase not only for her gifts of substantial range and lyrical ability – but also her ability to see a project like this through from beginning to end – as producer. This recording is highly recommended.”

“Lisa Engelken is another of those fine jazz singers I keep getting lucky to find. And there is no question that she stays well within that musical category. But she still shows a wonderful musical imagination.  Her voice is a smooth purr, but she can express a full range of emotions with it. On the album, she also shows a gift for scat singing. Engelken may be clearly a jazz singer, but she is still not afraid to take chances, and she makes them pay off.”

Two-Part Interview with Brian McCoy in the examiner.com

It’s very rare to have the opportunity to converse with a journalist about one’s craft and creative process.  And even more rare that, that conversation be given space in a newspaper.  Lisa relished this unique opportunity, thanks to Brian McCoy.  We hope you enjoy this 2-part interview.

Part I:    Interview with Brian McCoy

Lisa Engelken is trying to seduce you, and with her latest CD, there’s no doubt she’ll succeed. Caravan takes us on a journey through the sometimes bumpy territory of love…The mix of updated standards, covers of Joni Mitchell and Billy Idol tunes, and a little funk give Engelken a chance to display her athletic vocal technique, from kittenish tease to speedy scatting to full-throated belting. And the often complex arrangements are ably handled by the talented group of musicians working with her. Special kudos go to Adam Shulman on piano and Jon Monahan on guitar. Lisa Engelken deserves to be heard more widely and Caravan will hopefully introduce this talented singer to a wider audience.”

“This is a winner, pure and simple. Savor it all.”

Lisa Engelken may not have a household name when it comes to jazz singers, but this CD proves that she is most deserving of that stature.  The Kansas-born, California-based singer’s sophomore CD is a gem.  Key ingredients: an intriguing voice, a great mix of material avoiding the “tired tune” syndrome that dogs so many aspiring singers, and the ability to find material that she can imbue with her own strong jazz touch and feel.”
FULL REVIEW 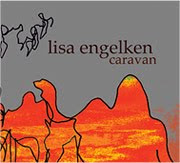 “…it is obvious that [Lisa] is already a major jazz singer. To her credit, she does not sound like any of her predecessors even though she has obviously learned from those who came before her.  Fans of jazz singing who enjoy unpredictable versions of standards will want Caravan.”

Review of Lisa in Concert:

“Thursday night at Dazzle, Engelken veered across a wide emotional spectrum so broad it could serve as a case study for manic depression.  From joy to sadness to nonchalance to numerous points in between, Engelken bared her soul on stage.  She put it on the line in the context of jazz standards that she arranged for herself.  Time and again, she came up with a fresh look at those old chestnuts.  “Caravan’ was a highlight and case in point.  Her arrangement of that one started off slowly almost like a tone poem.  Eventually, the pace increased to a gentle swing in ¾ time and finished with an extended jam in 7/4 time.  Not exactly your father’s Ellington.”

Caravan, in short, is a stunning, moving, and beautiful work that announces the arrival of an intelligent, fearless vocal perfectionist on the jazz landscape.  Turn “shuffle” off and listen to the CD, front-to-back, to appreciate all the nuance great vocal jazz has to offer.

by E. “Doc” Smith in BeyondChron.org

There have been some fabulous jazz musicians to come from DC over the last decade or so; pianist Geri Allen, bassist Ed Howard, guitarist Paul Bollenback, saxophonist Ron Holloway, to name just a few. They have become some of the most respected and sought after names in jazz. Add singer, composer and producer Lisa Engelken to that pantheon of great artists. Caravan will stand the test of time and is a harbinger of more great music to come.

“BOLD, lush, exotic and just a little bit dangerous, like waves of sound and heat:  EVEL KNEIVEL and JANIS JOPLIN.   Like Evel, she is a fearless daredevil, but never reckless, knowing exactly whether her voice can jump through a ring of fire and over 30 elephants – or whether it can go for 31.  And like Janis, she gives every ounce of herself onstage.”

Radio:  Sunday, June 20, 2010, Lisa had the pleasure to chat with radio host Brad Stone on KSJS, San Jose, CA about her upcoming dates in the San Jose/Morgan Hill area.

Radio:  Thursday, May 28, 2010, Lisa spoke with Scott Vander Werf, radio host at WGVU in Grand Rapids, MI.  The Mid-Day radio host played tracks from Lisa’s new CD “Caravan” and asked Lisa about the making of “Caravan”, about touring and the great musicians she’s been working with!

Radio:  Wednesday morning, May 5, 2010, Lisa had the rare honor to meet and speak with the amazing artist and radio host AVOTCJA on her show “Music of the World” in KPFA studios (94.1 fm, Berkeley) about tomorrow night:  Friday, May 7th CD  Release Celebration and Concert.

Radio:  Sunday morning, May 2nd,  2010, Lisa was a guest on KSJS ( 90.5 fm, San Jose) talking to Mike Schwartz live on his Sunday Jazz Show “Straight No Chaser” about Caravan and her sold-out CD Concert Celebration held Friday, May 7, 20107,  the Jazzschool in Berkeley.

Radio:  Thursday, April 1st, 2010, Lisa appeared LIVE on Community Bridge, the progressive alternative to talk radio on KSDB 91.9 FM, Manhattan, Kansas.  Yes, there IS progressive radio in Kansas, and it’s hosted by Chris Renner!  Michael Moore opened the segment with a brilliant discussion regarding the state of the nation.  You can hear Community Bridge on Thursdays, 5:00 – 6:00 pm.  Visit the KSDB website at: http://www.wildcat919.com.

Listen to INTERVIEW with Jim Sintetos.